What is a Microlight? 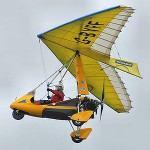 It’s simple – a microlight is an aeroplane, capable of flight in the same way as any other. It is restricted to 2 seats, it must weigh around 265kg at most and it must be able to fly at low speed. Other than that, it’s an aeroplane!
Actually the rules are slightly more complicated than that and a legal definition of a microlight can be found at the bottom of this page.

There are three main types of Microlight;

and powered parachutes which have a ram air canopy below which is suspended a wheeled power unit often similar to the flexwing type.

All three of these types require a pilot’s licence to fly in the UK.
Microlight Definition:

A microlight aeroplane is one designed to carry not more than two persons which has a Maximum Total Weight Authorised (MTWA) not exceeding:

A microlight must also have a stalling speed at the maximum weight authorised not exceeding 35 knots calibrated speed.

All UK registered aeroplanes falling within these parameters are Microlight aeroplanes.